(Nov. 4, 2014) — University of Kentucky's College of Arts and Sciences and School of Art and Visual Studies have welcomed Brooklyn-based interdisciplinary artist Katherine Behar to campus as part of a two-week residency. The public is invited to experience Behar's work as well through "E-Waste," a free public exhibition of new work from the artist presented in conjunction with her visit at UK’s Tuska Center for Contemporary Art, located in the Fine Arts Building. "E-Waste," which runs through Nov. 7, will have an opening reception beginning 5 p.m. Thursday, Nov. 6, at Tuska. 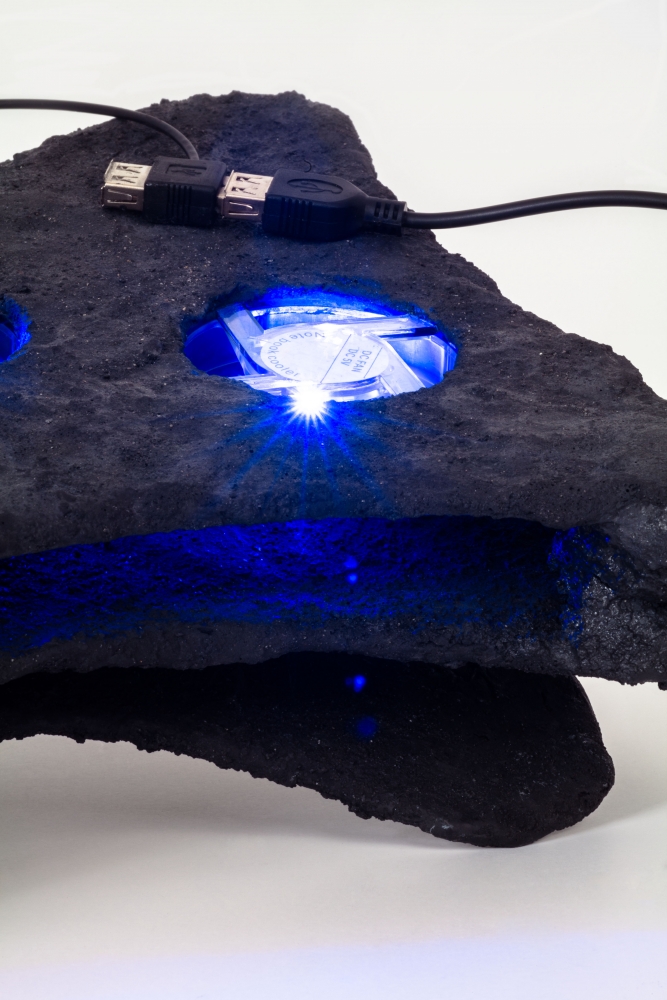 "E-Waste" centers on a new series of sculptures inspired by a science fiction scenario in which commonplace USB devices continue working, long after the humans they were designed to serve have gone extinct. The gadgets are transformed into mutant fossils, encased in stone with lights blinking, speakers chirping, and fans spinning eternally. The exhibition also includes a video series, "Modeling Big Data," in which the artist inhabits an obese, over-grown data body, to humorous and poignant effect.

Behar’s work challenges digital culture’s intense escalation of productivity. Wavering between poetry and parody, her works elicit sympathy for the devices we exploit, suggesting that we ourselves are becoming increasingly device-like: ensnared in compulsory productivity, whether “working” in the traditional sense for our own gain, or generating value for distant corporations each time we search the web or click “like.” Combining machine-made, handmade and organic forms, including a “fossilized” 3D printer, "E-Waste" offers a physical parallel to the excesses of big data, highlighting the counterpart surplus of consumer media artifacts, and drawing attention to its environmental impact.

The "E-Waste" exhibition at UK is made possible with support from a PSC-CUNY Award, jointly funded by the Professional Staff Congress and the City University of New York.

In addition to the exhibition of her work, Behar has been busy on campus since Oct. 26 working with students, visiting classes and presenting a coffee chat for residents of WIRED, the living-learning community for the College of Arts and Sciences.

As an interdisciplinary artist, Behar has worked in several mediums including performance, interactive installation, video and writing about digital culture. Her work appears at festivals, galleries, performance spaces and art centers worldwide, including the Museum of Contemporary Art North Miami, Judson Church in New York; UNOACTU in Dresden, Germany; The Girls Club Collection in Miami; Feldman Gallery + Project Space in Portland, Oregon; De Balie Centre for Culture and Politics in Amsterdam; the Mediations Biennale in Poznan, Poland; the Chicago Cultural Center; the Swiss Institute in Rome; the National Museum of Art in Cluj-Napoca, Romania; and many others.

Behar is the recipient of fellowships from the MacDowell Colony, Art Journal and the Rubin Museum of Art, in New York City, and grants including the Franklin Furnace Fund; the U.S. Consulate in Leipzig, Germany; the Illinois Arts Council; and the Cleveland Performance Art Festival. Her ongoing projects include two collaborations, the performance art group Disorientalism with Marianne M. Kim, and the art and technology team Resynplement with Ben Chang and Silvia Ruzanka. Behar's writings on technology and culture have been published in Lateral, Media-N, Parsons Journal for Information Mapping, Visual Communication Quarterly and EXTENSIONS: The Online Journal for Embodied Technology. She is currently assistant professor of new media arts at Baruch College.