Kentucky poet, novelist and environmentalist Wendell Berry has been named the 2012 Jefferson Lecturer in the Humanities by the National Endowment for the Humanities (NEH).  This is the highest honor the federal government betstows for distinguished intellectual achievement in the humanities.

Berry, a University of Kentucky alumnus with a degree in English and former creative writing professor at UK, will deliver the 41st Jefferson Lecture in the Humanities at 7:30 p.m. Monday, April 23, 2012, at the John F. Kennedy Center for the Performing Arts in Washington D.C.  The lecture is titled "It All Turns on Affection." 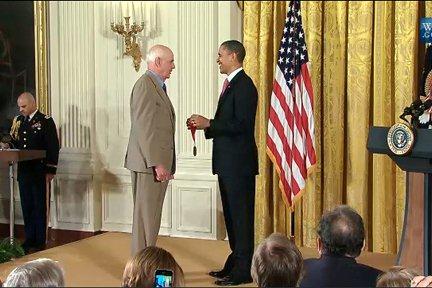 This has been a notable year for Berry. President Barack Obama awarded Berry one of only 10 National Humanities Medals for outstanding achievements in history, literature, education and cultural policy March 2, 2011.

Berry is renowned for his achievements as a poet, novelist, farmer and conservationist. The author of more than 40 books, Berry has spent his career exploring the human relationship with the land and the community.