Like many graduate students, University of Kentucky English Ph.D. candidate Sarah Schuetze lights up when she talks about her research. That in and of itself is not particularly strange – what’s perhaps a bit unusual about it is that her focus of study is rather dark, at times bordering morbidity. Schuetze’s academic concentration is disease – the culture of hysteria surrounding it, and the various ways it has affected characters’ lives in American literary texts throughout history.

She admits that it’s a bit odd, but she’s okay with that. 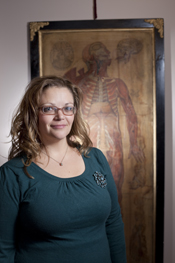 To that end, Schuetze’s fascination with disease is not synonymous with a fascination by health, or any other physical aspect of the body; it’s more in line with a deep-seated interest in the stigma attached to being sick.

“Disease is often treated as a bizarre thing,” Schuetze said. “A lot of superstition has developed around it.”

Superstition has long been a topic of interest for Schuetze, who got an MFA in creative writing from the University of Michigan, and often weaved the topic into her own creative writing (she has had poems published in The Columbia Poetry Review and the Australian journal Quadrant, and also has one set to appear in an upcoming issue of Limestone).

“It’s such an interesting concept – people trying to figure out things that they don’t know anything about, or trying to have control over things they can’t control,” she said. “Sometimes that’s with really bizarre things, things they’re afraid of, like witches or ghosts – or like health.”

Schuetze’s trajectory of interest primarily focuses on 18th and 19th century American literature, though she often also finds herself attracted to even earlier work as well. It’s a time period that she feels is somewhat underrepresented, not to mention rich with the peculiar, gothic-leaning elements that she has long been attracted to (ghosts and other “spectral” characters have also been a topic she has focused on). The general instability of the time period is another point of interest – an aspect that was certainly exasperated by epidemics, as Schuetze has noted.

“With cholera in the first half of the 19th century, it really challenged city administration,” she points out. “Health committees needed to be developed because they didn’t exist – it shut the city down.”

“So many things were changing,” she added. “There wasn’t a lot of stability in the economy, the nation or everyday life, and people’s health was really unstable as well.”

Examining how disease has disrupted various facets of life throughout these literary texts – from city administration to personal relationships and self-image – has helped Schuetze get at the ultimate question she hopes to address with her dissertation: why is disease so frightening? While she doesn’t deny that it is somewhat related to a general fear of death, her research has suggested that there’s more to it than that – that it is a learned fear, made stronger by the general disruption that disease has historically caused in people’s lives. She first became intrigued by the topic while reading a frontier-era travel narrative by Timothy Flint, when she noticed how the narrative took on a different tone entirely when discussing characters that had gotten ill. It was at that point that it occurred to her that illness carries many elements of a gothic convention.

“People are afraid of it, they don’t know what to do with it, and it invades them,” she said. “Even with non-fiction it can become terrifying. At that point, I just started to become really aware and really curious about it.”

Schuetze, who is originally from Wisconsin and received a Bachelor’s and a Master’s in English from the University of Milwaukee, is aiming to complete her Qualifying Exams in January. In March she will also travel to Vancouver to present a paper at a conference hosted by the American Society for 18th Century Studies (presenting at conferences has also allowed Schuetze to travel to England and Hawaii since she started at UK). This spring, she will really start to hone her focus in on her dissertation, and she reports that she couldn’t be happier with her committee, which includes four professors, whose specialties range from the frontier to the law, and from friendship to autobiography.

“I’ve been really fortunate because I managed to nab up all the Americanists who work with my time period,” she said. “I have an additional person just because I wanted to work with everybody.”

Chairing the committee is Marion Rust, whose areas of expertise include 19th-century American Women Writers and Narratives of the Disenfranchised in American Culture to 1865.

“She has been such a great role model for a woman in this field, because she has a family, and she’s also a really respected scholar and colleague to her peers,” Schuetze said. “When you read her work, you can tell she really loves what she’s writing about, and that’s so admirable and inspiring.” 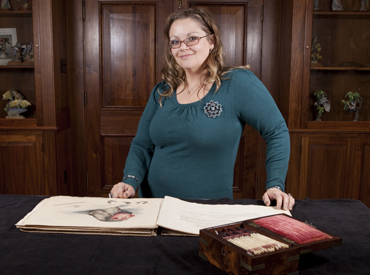 With eyes that light up at the discussion of yellow fever, smallpox, cholera, and the devastating effects that disease has had on characters throughout her favorite historical texts, one gets the indubitable sense that genuinely loving and immersing herself in her work is a trait that Schuetze has picked up herself.

"It warms my heart,” she said with a smile – and only a slight hint of irony.

Profile photo at top of page: The Anatomy of the Human Bodies, With Figures Drawn After the Life By Some of the Best Masters in Europe...By William Cowper. Oxford, Printed at the Theater, for Sam. Smith and Benj. Walford [etc.], 1698. Transylvania University Medical Department Collection, Special Collections, Lexington, Ky.