There are four main mechanisms of bedrock channel erosion—abrasion, dissolution, cavitation, and weathering-and-plucking. The latter occurs when weathering along joints and bedding planes of the bedrock loosens slabs or clasts, which are then entrained (plucked) during high flows. Cavitation is difficult to observe or prove in the field, but likely occurs in the stream I visited this week, Raven Run (near Lexington, KY). The other mechanisms all clearly exist.

Weathering and plucking is the dominant erosion mechanism of the bedrock streams hereabouts—the photo shows the flat surfaces and angular features that result from weathering along the horizontal bedding planes of the limestone and the frequent vertical joints, and subsequent removal of the resulting slabs. 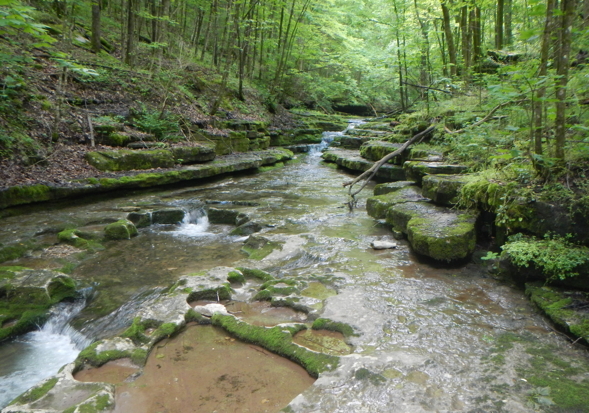 The “vanishing point” terminology refers to methods to determine how far apart elements of a scale hierarchy have to be before they are no longer directly related. I attempted to justify the “savage journey” with the argument that the scale domain, as opposed to the spatial and temporal domain, is little explored and largely unknown. 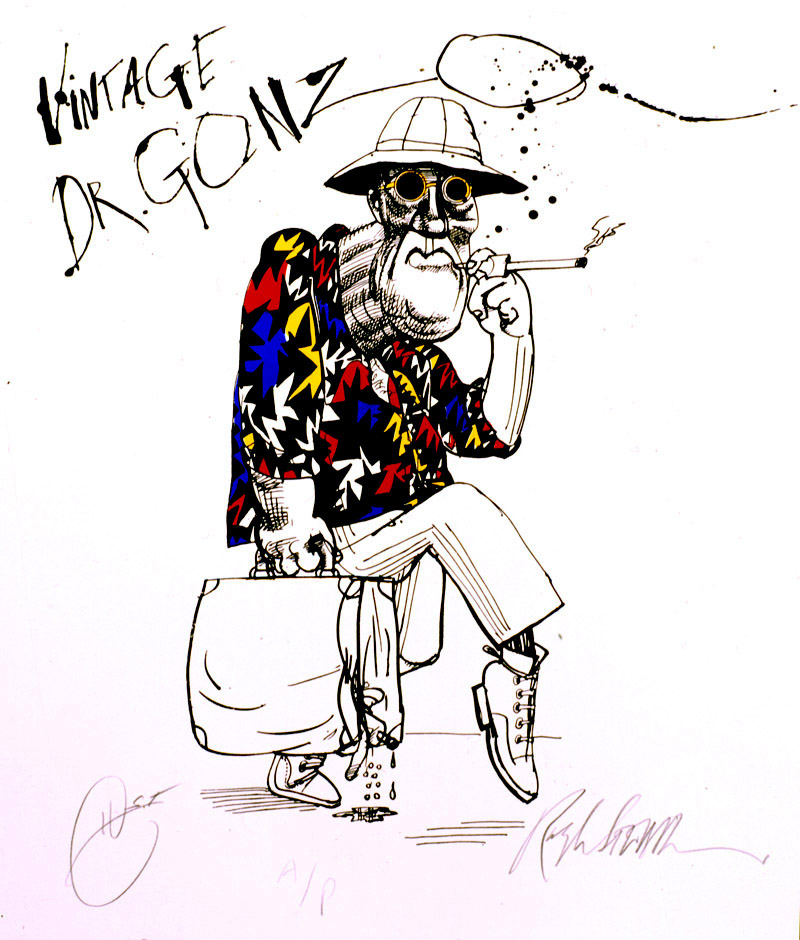 Hunter S. Thompson, by Ralph Steadman (an illustrator who worked with HST; www.ralphsteadmanartcollection.com).

Rich Donohue: "Finding the Plus in New Maps Plus"

Mrach 25, 2016 - 3:30pm 234 Classroom Building Rich Donohue, Postdoctoral Researcher in the Department of Geography at the University of Kentucky

As environmental systems approach critical thresholds or tipping points, they may experience increased variability, which in the literature on critical environmental state transitions has been referred to as “flickering” (e.g., Lenton, 2011; Scheffer et al., 2012; Dakos et al., 2013). This is primarily the case for noisy, stochastic systems, which is not the case for many lab and mathematical models, but is emphatically so for most real-world environmental systems. As Dakos et al. (2013) put it:

Most work on generic early warning signals for critical transitions focuses on indicators of the phenomenon of critical slowing down that precedes a range of catastrophic bifurcation points. However, in highly stochastic environments, systems will tend to shift to alternative basins of attraction already far from such bifurcation points. In fact, strong perturbations (noise) may cause the system to “flicker” between the basins of attraction of the system’s alternative states. As a result, under such noisy conditions, critical slowing down is not relevant, and one would expect its related generic leading indicators to fail, signaling an impending transition.

Some miscellaneous observations from the 2016 General Assembly of the European Geosciences Union in Vienna . . . .

I participated in a paper session called “Beyond the Case Study: Concepts in Earth Sciences.” Geosciences are of course built on case studies, and without them we would have no useful or interesting theories, hypotheses, syntheses, or conceptual frameworks. But in a professional meeting context you get a bit tired of sitting through the detailed results from yet another watershed monitoring study, lab experiment, numerical model, paleoenvironmental reconstruction or what have you. Unless these things are dead on your own interests, it is much more interesting to be challenged by some big ideas and overarching concepts and themes.

That’s what this session was all about, and it went well. It is rare—in fact I can’t remember the last time—I sat through six presentations in a row that all held my full attention from start to finish.

To me, colluvium—at least conceptually—is pretty simple. When soil or sediment is eroded (or mobilized via mass wasting) from a hilltop or hillslope, moved downhill, and redeposited before reaching a stream valley, then those deposited materials are colluvium.

But not everyone shares my perspective. Many soil scientists and engineers, for example, restrict colluvium to deposits associated with mass movements. Some geomorphologists attach additional criteria beyond those of my simple definition. This issue is important beyond basic issues of scientific communication, because the identification and measurement of colluvial deposits is critical for studies of sediment budgets and mass balances of hillslopes and drainage basins, and for understanding regolith development and pedogenesis.

From 2010 through the first two-thirds of 2015, at least 211 scientific articles with the term “tipping point” and 109 with “regime shift” in the title were published (according to the Web of Science database, as of 23 November 2015). These span a broad range of science, technology, and engineering, but the geosciences are well represented. In recent years the concept of tipping points in the global environment related to climate change, regime shifts, ecosystem collapse and other phenomena has garnered a great deal of both scientific and public attention. “Tipping point” is often used in public (and sometimes scientific) discourse to refer to impending doom, or at least major environmental changes with uncertain and potentially negative impacts. However, tipping points are not necessarily associated with negative impacts on humans. Nor are they inevitably associated with direct or indirect human agency, as Earth history is marked by numerous tipping points and regime shifts.

Axioms of the Dominant Controls Concept

The “dominant processes concept” in hydrological modeling argues, in essence, that there are too many potentially relevant hydrological processes to feasibly or efficiently include them all in a single model. However, in any given watershed a handful of processes dominate the hydrological response, and an effective model may be developed based on those. This argues for adapting models to local conditions and needs, rather than attempting to construct “one size fits all” models designed to handle any watershed, anytime, anywhere. Grayson & Blöschl (2000a) are credited with initiating the DPC; I encountered it through Bellie Sivakumar (2004, 2008).

In my previous post (Soil Erosion Rises Again!) I noted a recent spike in interest in erosion and soil conservation, following previous ones in the 1930s and 1980s. One manifestation is the work of Frans Kwaad, a Dutch physical geographer, who has reinvigorated discussion of the relative onsite and offsite costs of erosion.

Onsite (economic) costs are generally related to declines in crop or grazing productivity, or the loss or degradation of economically productive land. Offsite costs are associated with pollution and infrastructure damage associated with the deposition or delivery of eroded sediment, habitat damage or destruction, nuisance costs of removal of deposited sediment, etc. Kwaad’s work-in-progress synthesizes a number of studies and data sources, and on-balance indicates that off-site costs are greater. 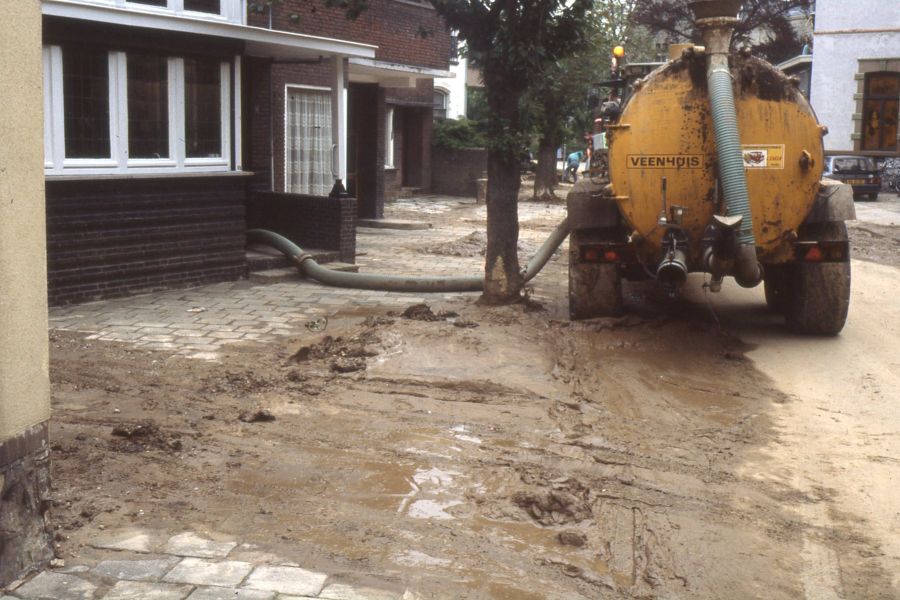 Cleaning up eroded soil after a storm in the Netherlands (F. Kwaad photo).